Un cheval, des silex
Benoit Maire
Lying Weapon on the Beach
Critique de la mesure
Detours which have to be investigated
The Long Godbeye
Benoît Maire
Geschichte der Geometrie
Aesthetics of Differends
The Object of Criticism
Chanson pour Saadane Afif
Materiality of Theory
Repetition Island
The obstacle is tautology
The Aesthetics of the...
L'obstacle est la tautologie
The Square in a Forest 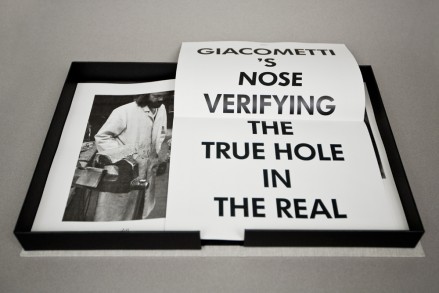 The Aesthetics of Differends (2008 -) is an artist's book documenting Benoît Maire's ongoing research on the 'differend' - a concept borrowed from philosopher Jean-François Lyotard. Produced in a limited edition of twenty-five French-language and twenty-five English-language signed and numbered copies printed on Cyclus paper, each of which comes with a specially created fabric-covered box, Benoît Maire's book is a work in progress comprising eight sixteen-page sections to date (January 2011). It constitutes an art object in its own right, while doubling up as both a philosophical and an artistic investigation into the key questions of postmodernity and the significance of the postconceptual artwork.

The dialectic between art and philosophy has always been the cornerstone of Benoît Maire's artistic practice, but in The Aesthetics of Differends it is explicitly formulated for the first time: images of the corpus of artworks he has realized on the subject of the differend are confronted or fleshed out by largely unpublished philosophical reflections that expand on Lyotard's ideas. Whereas the latter applied the term 'differend' to conflicts in which the opposing parties use incommensurable modes of discourse, Benoît Maire emphasizes the importance of the concept for grasping the discrepant forms of expression making up the postmodern artistic landscape. Likewise, Benoît Maire's texts are classified according to different categories - each corresponding to a specific writing style - and in some cases feature numbered paragraphs, thereby echoing the theme and lay-out of Lyotard's landmark 1983 book (1).   Each of these categories is printed in a different typeface, so as to assist the reader in navigating Benoît Maire's dense and consistently thought-provoking work.

The first category consists of 'Sections' comprising both texts and images. These address the incommensurability of seeing and saying - which constitutes the primary differend underlying Maire's system of aesthetics. Section 1 features works exhibited at the Vitrine de Cergy. Here, images and texts co-exist alongside one another, while Section 9, which corresponds to one of the pieces shown in Benoît Maire's exhibition at De Vleeshal, opens with an image of a crowd in the place of the word.

The process of substituting images for words and vice versa becomes more abstract in the following sentences: for instance, the phrase 'in such a way that his' is followed by a rectangle with a chipped-off corner. For Benoît Maire, words are no more informative than images and the value of what is said and seen resides in the different affects these modes of expression engender.   A more formal presentation of the concept of the differend is to be found under the category heading 'Didactic', while the texts assembled under the heading 'Talks' include an introductory presentation given in Amsterdam on the same concept. Repetition, a notion that has been explored by philosophers ranging from Nietzsche to Deleuze, enables Benoît Maire to validate his ideas, while intensifying and enhancing their impact. Another feature of his work is order reversal. For instance, he describes The Aesthetics of Differends as a body of work in which the answers come before the questions – a notion borrowed from Lacan. Likewise, the transcript of a question and answer session following one of his lectures precedes the transcript of the lecture itself. In this lecture, given in Amsterdam in 2010, Benoît Maire defines the artwork in terms of two conflicting approaches, the analytic and the synthetic. The first can be defined as the in-depth exploration of a question or object, carrying with it the attendant dangers of redundancy and unintelligibility, whereas the second approach, which consists of establishing connections between different ideas or objects on the basis of common themes, runs the risk of banality and generalization. Benoît Maire's thesis is that these two tendencies constitute the dialectic at the heart of the contemporary postconceptual artwork and that a successful piece strikes a balance between them.

The questions of order reversal and succession are further explored under the category heading 'Figures', which consists solely of images. The photographs of the bronze sculpture The Nose (2010) making up Figure 1 do not portray the work in its finished state, but during its construction, thereby referencing Benoît Maire's system of aesthetics, a work in progress. Confirming this impression of unreadiness, the photographs are blurred, while their subject, the nose in the process of being built, never occupies centre stage, but is photographed amid the clutter of the foundry, awaiting the moment when it will take up its function as an artwork. The phrase 'Giacometti's nose verifying the true hole in the Real', which is classified under 'Axioms', provides a further indication as to the sculpture's meaning. Its extraordinarily long nose points beyond the space surrounding the head to something that the subject can neither see nor hear - the true hole in the Real, a reference to Lacan's Symbolic Order.

The 'Burdens', which constitute yet another category, represent answers to which the questions have yet to be found, while the category heading 'Methodology' features images and texts pertaining to the video Organisation of the Narrative and Structural Models Conjugated in the Sections. Based on affect rather than logic, the video explores the space between seeing and saying with reference to the structure of the 'Sections'. Finally, the text featured under the heading 'Ingress' looks at the artist Dash Snow, whose work exemplifies issues that Benoît Maire addresses in his book, namely the psychoanalytic concept of the lack and Derrida's notion of the cut.    The book also comprises a black and white photograph of a sculpture entitled Object for Measuring (2010), which will be examined in forthcoming supplements. These supplements will also include essays on the work of Tino Sehgal and Adrian Piper and will be sent to individuals and institutions who purchase the book until such time as the project is brought to a close.

When completed, The Aesthetics of Differends will constitute not only a contemporary aesthetics as seen through the eyes of an artist, but also a work of art that materializes aesthetic concepts. Associating lucid analyses with pertinent references, it is likewise a perfectly balanced example of a postconceptual artwork.