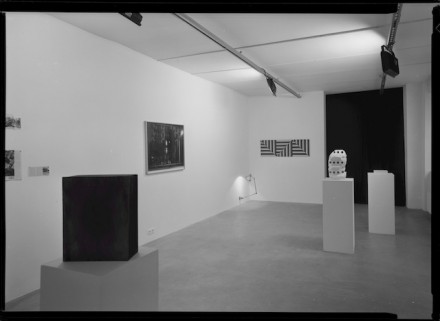 "the obstacle is tautology": this statement rests on a general proposition according to which conceptual art does not exist except when it is brought into being by repetition. This is a strong proposition. I claim that a being is an object belonging to the world and that it has no meaning when it is outside of "the stream of life", as Lawrence Weiner would say. A tautology, on the other hand, does not state anything apart of itself, its pure form, and destroys the Saussurian structure of a sign (signifier/signified) by not indicating anything outside of itself. In this sense, the traditional tautological conceptual art is not an object of the world - it can become one only when it is treated as a model and when its tautological functioning is taken as a reference. If we treat tautology as an obstacle we can use words in time and space to speak against it and produce echo.

It is not the aim of this exhibition to prove what I have insisted on above. I am only saying that "the obstacle is tautology" is the title of this exhibition. Within it one can see Philippe Fernandez' cinematographic adaptation of the myth of the Plato's cave, a portait of Jiri Kovanda remembering his first joy by Boris Achour, constructions made by Michal Budny, a portrait of an ideal spectator by Alex Cechetti, an electric lamp which casts light on its socket by Etienne Chambaud, an instruction for a collage made from a motorbike magazine by Liam Gillick, a painting by Kazys Varnelis and a photograph made by Bruno Serralongue one day after the event which motivated the decision to make the picture. I have a feeling that these works by themselves and within each of these artists corpus are questioning a certain outside. This outside is indicated by the fact that these works make a sidestep akin to the one requested by structural and non-hermeneutical analysis. This sidestep allows to move outside of the structure.