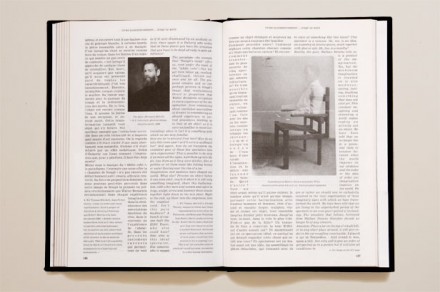 This editorial project, directed by the artist Benoît Maire, is dedicated to the multiple ties between cinema and the visual arts. Its perspective is resolutely interdisciplinary and the approach could thus be viewed as postconceptual. Mainly including contributions by art critics and artists, the book presents the myriad possibilities of writing on the medium and the latter's constant shifts, including its displacement into the exhibition space. From Florence Ostende's subjective narrative on her journeys through museum rooms and Ariane Michel's flip book which rhythms the publication, up to Hugues Decointet's written and visual digressions on Joao Cesar Monteiro's Snow-White based on the play by Robert Walser..., reflexivity is no longer a question of self-awareness and autonomy but, on the contrary, one of displacement and overlap. Cinema permeates the publication, which is placed under the seal of impurity, i.e. under the aegis of hybridisation, fragments and discontinuity. In the mode of reappropriation, references multiply like so many avenues to be explored, like so many slanted perspectives. Vivre dangereusement...jusqu'au bout is a kind of paradoxical handbook - it also borrows its title from a poster visible in a shot in Jean-Luc Godard's film Breathless - offering the opportunity to, once again, dismantle and shake up the machinery of cinema.